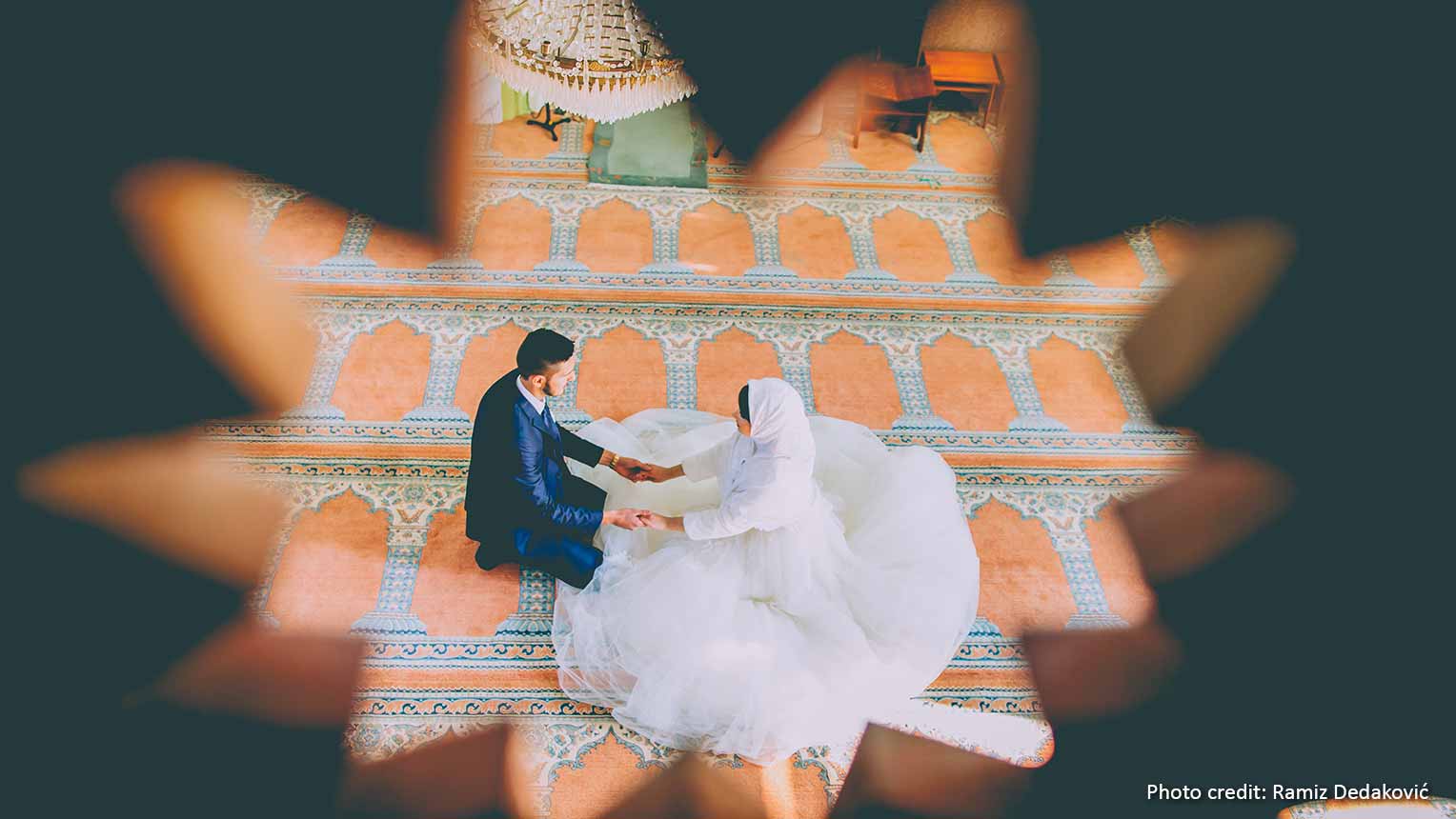 Marriage ceremonies differ among various ethnic groups and religions, each with its own set of rules. It is not only the differences in the actual ceremonies but also the legal system within a country, which either accepts or rejects certain marriage unions.

In England and Wales, legal marriages are to be preceded by a minimum of 28 days notice, they are to take place at a prearranged location and are to be held within the presence of designated officials, as per the Marriage Act 1949. The Muslim marriage ceremony, ‘Nikah’, differs somewhat in that it can take place at any location, whenever the couple decides to do so and no particular ceremony is required, although witnesses are usually requested to be present.

Furthermore, informal religious-only marriages are not legally validated and are considered to be synonymous with unregistered Muslim marriages according to the Law Commission of England. As a result, the legal status of these unregistered marriages has been questioned due to a lack of adherence to formal marriage requirements. When it comes to Muslim marriage traditions, a mosque is a preferred venue to perform the marriage ceremony. However, a large number of mosques being used in the UK are not legally registered, hence any ceremonies held within their walls will not be considered as valid in the UK.

According to Muslim beliefs about marriage, it is the Islamic ceremony which is the most important to them. It is a fairly straightforward ceremony during which there is an exchange of vows between the bride and groom in the presence of witnesses. An imam usually carries out the ceremony, although having a religious official present is not mandatory for it to take place.

Couples do not consider the legal registration of their marriage as being significant, but merely a formality. For them, the ‘Nikah’ is a valuable marriage contract that validates the union of a man and wife. For this reason, some Muslims will hold a traditional Islamic marriage ceremony first and then get married in court to register the union, as required for Muslims in the UK, Wales and European countries. However, this is not always the case, as many married Muslim couples do not register their marriage legally.

What do Muslims believe about marriage?

While some Muslims have simple wedding celebrations with close friends and family to celebrate their special day, others are known to hold extravagant feasts and parties with thousands of guests, and men and women celebrating in different rooms. Whichever way they decide to do it, there are certain Muslim marriage rules which need to be respected.

Firstly, no modern Muslim weddings are to be performed in secret. Marriages are to be publicly announced and this is done by having a wedding party, known as ‘Walimah’. During ‘Walimah’, the marriage announcement will be made and thereafter the celebrations will commence as the bride and groom enjoy their time together as a married couple for the first time.

The majority of Muslims see marriage as an integral part of life and the ‘Nikah’ is a contract between a man and his wife allowing them to live together. Arranged marriages are quite common and the family will choose a suitable bride or groom for their son or daughter. The two families then have the opportunity to get to know one another prior to the official union. Most importantly, a married Muslim couple should remain faithful to one another at all times, as is having children and bringing them up in a Muslim household. Adultery is completely forbidden in Muslim culture.

In Islam, the differences between men and women are acknowledged, with the woman being the homemaker and the man’s role being outside of the home in the working environment where he can provide for his family. Men are seen as the protectors of their family unit and women are expected to bear children as part of their role within the household as both a wife and a mother,

Muslims for marriage would have read about it several times during their lives as it is mentioned in the Qu ‘ran and they take its words to heart. The Qu ‘ran also teaches that it is acceptable for men to have up to four wives as long as they are treated with equal respect. If a man is not able to do so, he should make the decision to rather have only one wife. This is a common practice in today’s Islamic societies. Polygamy is, however, not accepted in the UK and many westernized countries. On the contrary, Muslim women may only have one husband.

Polygamy is yet another factor that makes integration into European societies a challenge as these marriages are not accepted by European laws. Hence, many legal issues and social problems tend to arise as a result of such illegal unions. Muslim parents may not receive child benefits from the government if they are not legally married. This has caused many Muslim men to deny any polygamous marriages which they may have to get around the system of the country in which they live.

Pre-marital sex is not accepted in Islam and it is uncommon for unmarried Muslim couples to cohabit. This seems to be changing as many Muslims are influenced by the values of the modern world in which they live. Many are finding that it is easier for them to live together before marriage.

According to UK surveys, at least 60% of Muslim women who have had a traditional ‘Nikah’ are not legally registered as being married. Such legal formalities may not be so important in a Muslim culture marriage, but it takes away any of their rights should they be faced with a divorce in the future. One of the disadvantages of ‘Nikah’, is that the husband is entitled to ‘triple talaq’, whereby he may divorce his wife instantly via verbal communication. Although divorce is permitted in Islam, it is not the favored option. It should be avoided as it means breaking the ‘Nikah’ and couples are encouraged by their families and their imam to try and work through their marital difficulties and only consider divorce as a last resort. Relatives often offer advice and their opinions are valued, which could sometimes put pressure on a couple to reconsider their divorce proceedings.

A campaign for the compulsory registration of all marriages in the UK was launched by an Islamic law specialist, Aina Khan. Khan found that more than 80% of young couples under the age of forty, only had religious marriage ceremonies. Unregistered marriages are far easier to terminate and hence there is no longer a stigma surrounding the divorce process as was the case with previous generations. Over her 25 years of experience in marriage and divorce cases, Khan sees this as an ongoing problem. She feels that both parties should be made aware of their legal rights in the country they reside in the event of a divorce. Any woman who has not undergone a civil marriage ceremony, will not, as per UK law, be able to go to court to claim a division of the couple’s assets. Of the 923 women who were surveyed, six hundred and ninety-two said that they would most definitely prefer to have their marriage legalized, which would be beneficial to them.

With so many unregistered marriages, there could be a transition from the legal state unions to another modern cultural norm of cohabitation. Religious-only marriages are now considered as simply co-habitation and with so many informal living arrangements within the UK and Europe, and the lack of recognition of religious-only marriage unions, it is no wonder that young Muslim couples are finding it easier to cohabit, which is contrary to their Muslim marriage beliefs.